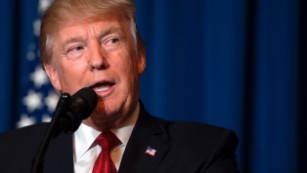 President Donald Trump said Tuesday his forthcoming executive order barring new immigration will apply only to people seeking green cards, last 60 days and won’t affect workers entering the country on a temporary basis.Spelling out details of the measure for the first time since tweeting late Monday he would “temporarily suspend immigration into the United States,” Trump announced something short of a full halt on immigration amid the coronavirus pandemic.Instead, he said the provision would amount to a 60-day pause only on people seeking permanent resident status in the United States. An administration official with knowledge of the process told CNN the order only addresses green cards because the temporary work visa portion is more complicated and needs more time to sort out, particularly given the fact that many of those currently in the US on work visas are working in industries related to the pandemic, from workers at food processing plants to health care workers.Trump said on Twitter Wednesday he would sign the order later in the day. An administration official told CNN that legal aides spent Tuesday working on the order. Trump said he would review the executive order at the end of that 60-day period and decide if it should be renewed.

Coronavirus stimulus payment scams: What you need to know

This site uses Akismet to reduce spam. Learn how your comment data is processed.

Thank you for subscribing.

we respect your privacy and take protecting it seriously